Hemingway Day– July 21st– fast approaches. To set up our celebration, New Pop Lit editors Karl Wenclas and Kathleen M. Crane made a quick excursion a couple weekends ago up to northern Michigan. (Supplementary excuse– a respite from our jobs!)

We traveled by car. By contrast, when Ernest Hemingway made his visits up north, beginning over one hundred years ago, transportation options were different.

Hemingway’s family lived in Oak Park, Illinois, near Chicago. During summers they’d take a steamboat to Harbor Springs, Michigan, on the northwestern edge of the state, on Lake Michigan. 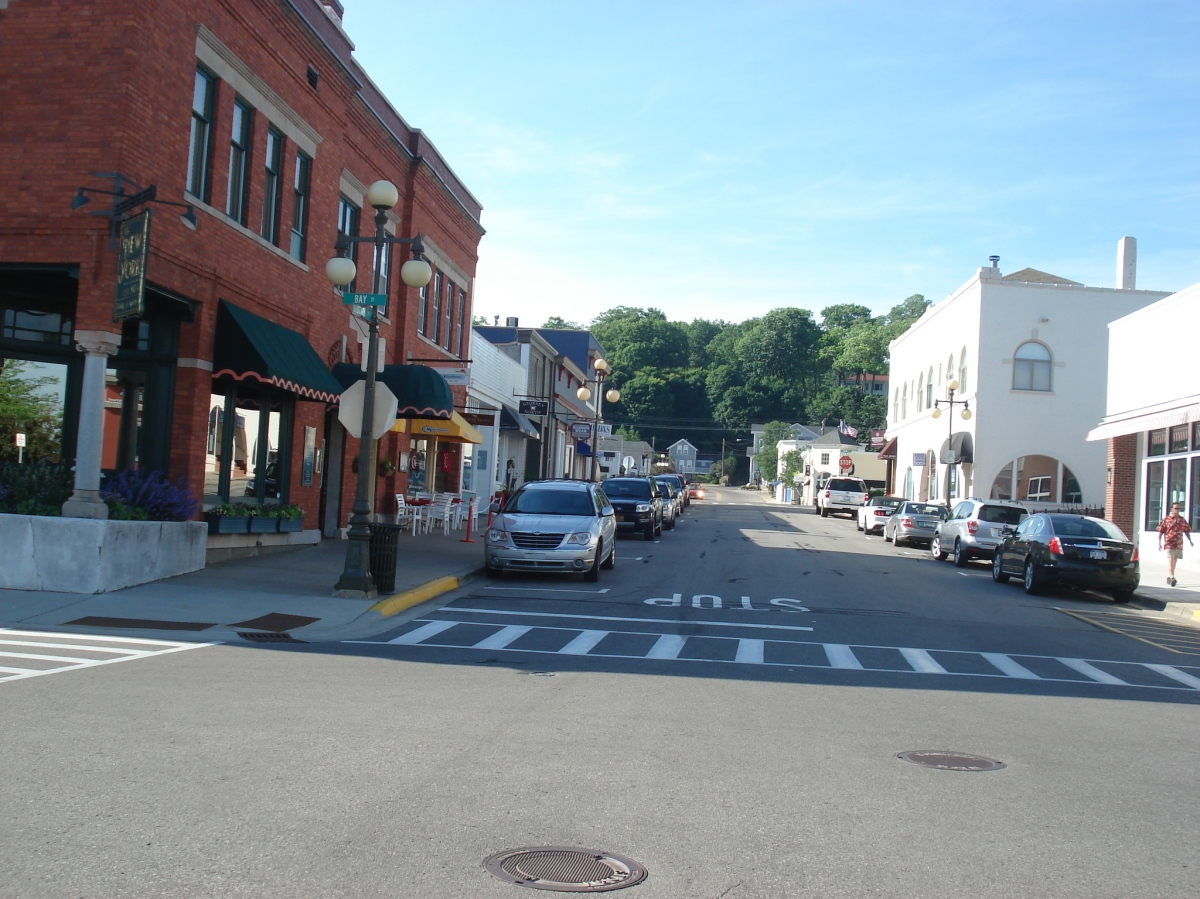 The family would then travel by rail to their cottage on Walloon Lake. Back then, railroads were the preferred mode of transportation. One sees evidence of this throughout the northern half of Michigan’s lower peninsula, in the form of converted railway stations. 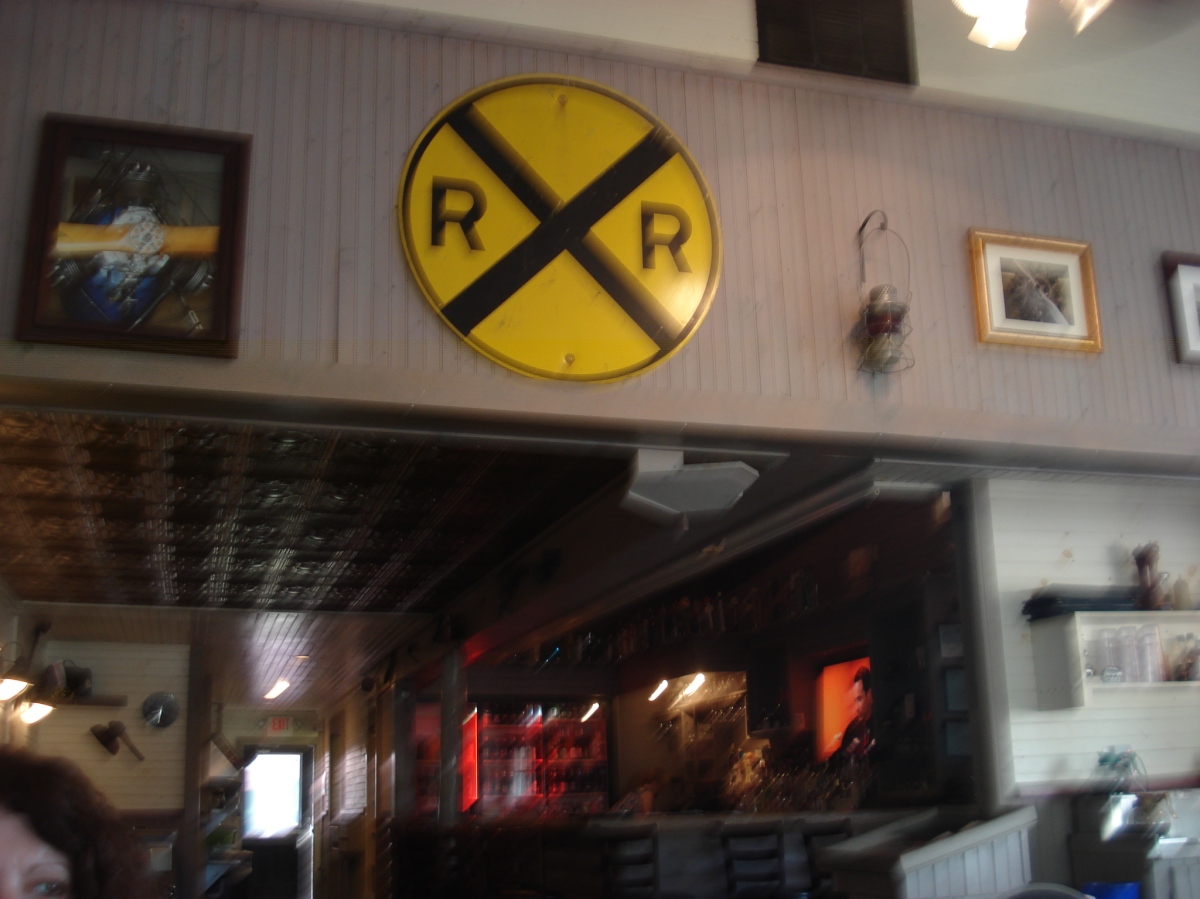 As we began our weekend quest, one question was uppermost in our minds about America’s most famous writer:

“What about this area formed Ernest Hemingway as a writer?”

The state of Michigan, for all its recent exodus of residents, is much more populous than it was in Hemingway’s time. Today the state’s population is estimated at 9.9 million. Census figures in 1910 had it at 2.8 million. In 1920, 3.7 million.

When Hemingway visited the state, the great cutting down of Michigan’s primeval forest was a recent memory. One finds hints of that forest today.

Long gone are the lumberjacks and brassy-haired prostitutes who peopled the Nick Adams stories. 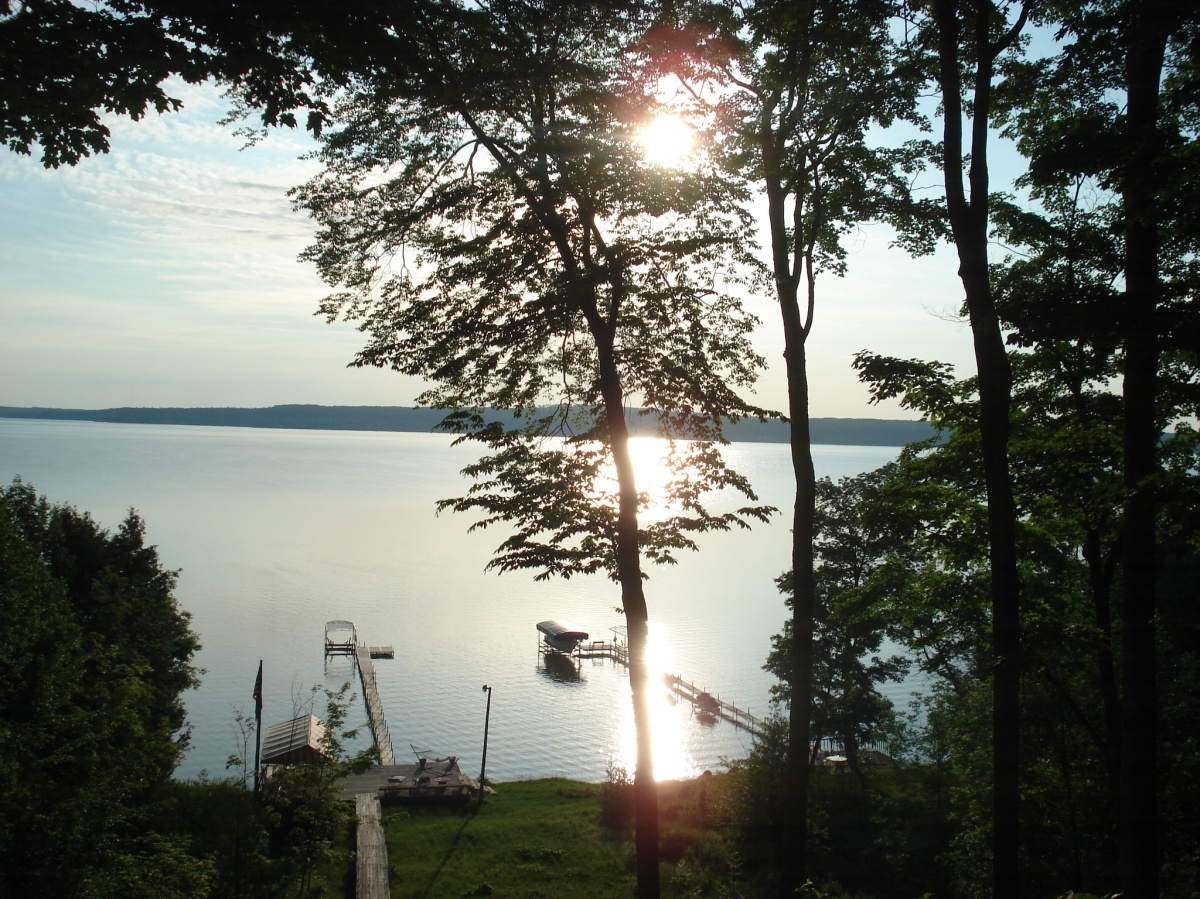 (This photograph was NOT taken from the Hemingway cabin on Walloon Lake, which is private property. But it could’ve been.)

As early as his Michigan stories Hemingway made use of his realistic eye– yet was able to romanticize his people and places at the same time. When you begin entering Hemingway territory, you gain the same feeling he expressed in the stories. The feeling of Michigan’s air, trees, and people– the part of living nature which remains much the same as in Hemingway’s day.

THAT IS, you can maintain the illusion if you block out the occasional-but-unavoidable signs of the worst parts of contemporary civilization: franchise chains. McDonald’s; Burger King; Wendy’s; et.al.: blots on the landscape that should be banned from more natural areas. They should be confined to inner suburbia– there should exist areas where people can escape from the chains’ aesthetic crimes.

To get these images out of the reader’s mind, a few remarks on Hemingway’s modernist techniques.

Ernest Hemingway was a modernist, but one who wrote with strict clarity. This makes the images he presents MORE real than those of a strictly realistic writer.

His most modernistic story is “Banal Story.”

It takes a few minutes for the reader to get his bearings. Hemingway, with a few spare brushstrokes, paints a scene.

The narrator is a writer who sits on a warm stove. It’s apparently wintertime.

Then the narrator is reading a blurb for a literary journal named Forum.

Then, juxtaposed at the end, is a powerful description of the death of– and mourning for– a bullfighter.

This story shows that the Hemingway technique was not simply writing short, terse sentences. It was also about combining those sentences. His intention was to create stories like modernist paintings.

To further cleanse the palate.

One of our favorite spots discovered during our scouting was the small town of Alanson, located between the chief highway north, and Petoskey on Lake Michigan. In Alanson there’s a neat tavern called Crooked River Tavern at which a talented piano player performs for free on Friday and Saturday evenings, in a relaxed setting. Everyone is friendly. This tavern is also famously known for its home-made cheesecake, which is the best you’ll taste anyplace. 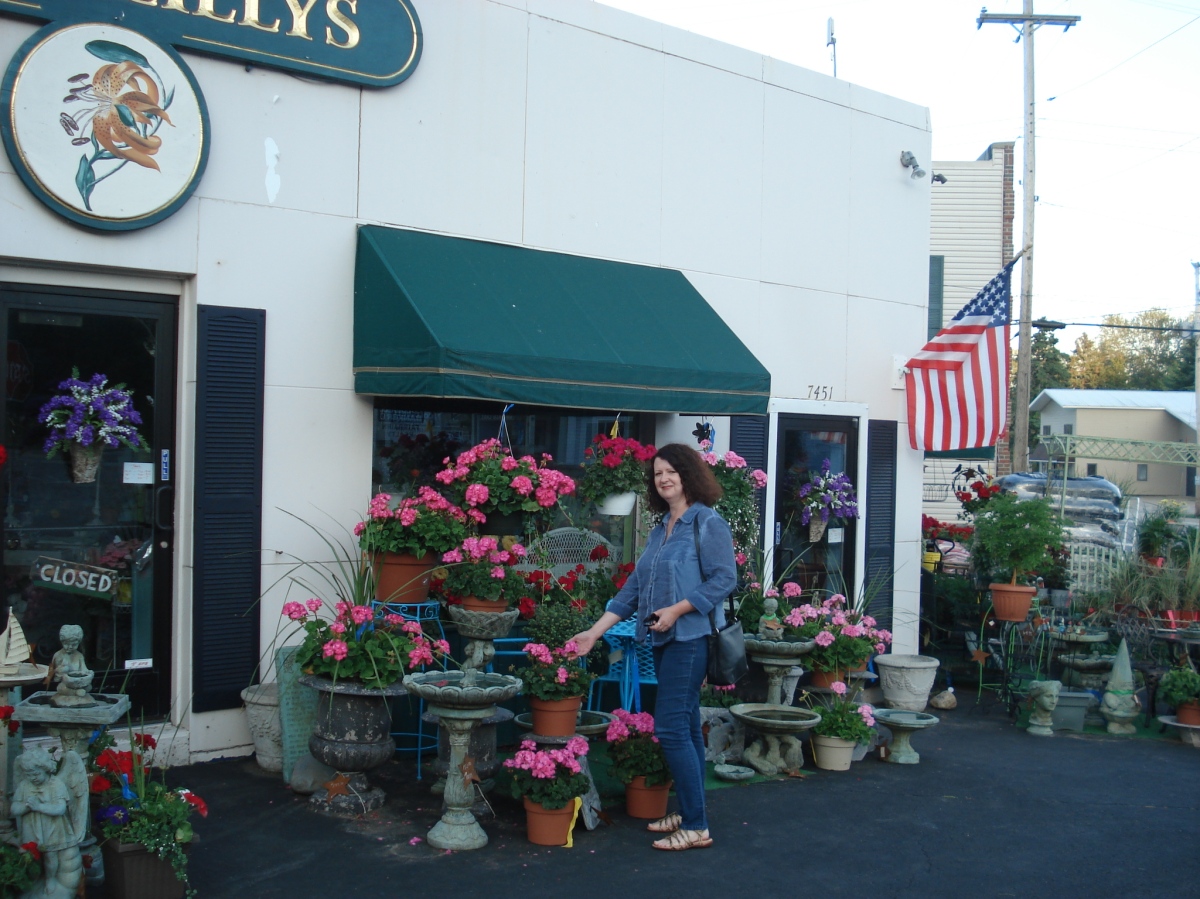 We could say many more good things about Alanson, but it’s tangential to our search, so we’ll move on to Petoskey. 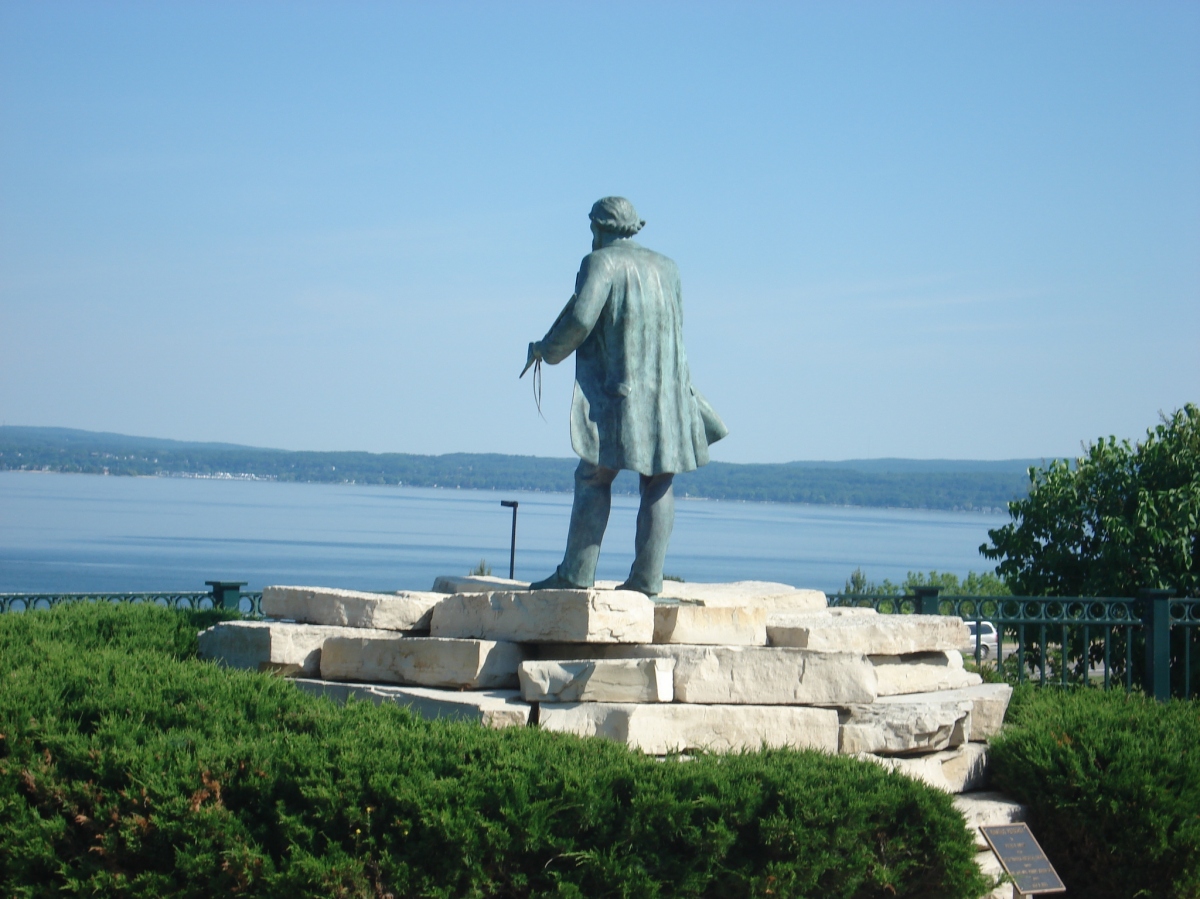 The statue of Ignatius Petoskey overlooks the bay. Don’t tell anybody– we don’t want the resort town to become too popular– but the setting of Petoskey is so beautiful as to compare with the Riviera.

Ernest Hemingway spent much time in Petoskey when he returned from his service in World War I. His story “Soldier’s Home” indicates that he felt out-of-sorts with his family and Oak Park neighborhood. So he escaped– fleeing to where the air was clean. In northern Michigan. He could refresh his thoughts. He could also write.

The Perry Hotel is where Ernest Hemingway lived in 1919. The hotel’s proprietors allowed us to look around the hotel, as we plan to stay there when we return to the area.

It was while looking at the original lobby on the second floor (shown above) that we experienced a strange happening.

As if from nowhere, a tall man with a white beard entered the nearby elevator. He was holding a fishing rod in his hand. We looked at each other.

We ran down the stairs to the main floor, hoping to beat the man to ground level. But nobody was near the elevator.

“Did someone just walk by?” we asked the woman at the desk, which the man would’ve passed.

Here’s a sign we saw in a nearby coffee shop named North Perk Coffee:

We don’t know if the sign applies to Hemingway. Based on our investigations, we believe that while in Petoskey Ernest Hemingway drank other things. As we’ll see.

While in Petoskey Hemingway did a great deal of fishing. He had to have, being Hemingway. Here’s a view of a possible location:

When he returned from fishing, Hemingway would’ve sat in the garden of the Perry Hotel. Here he might’ve contemplated literature– or life. 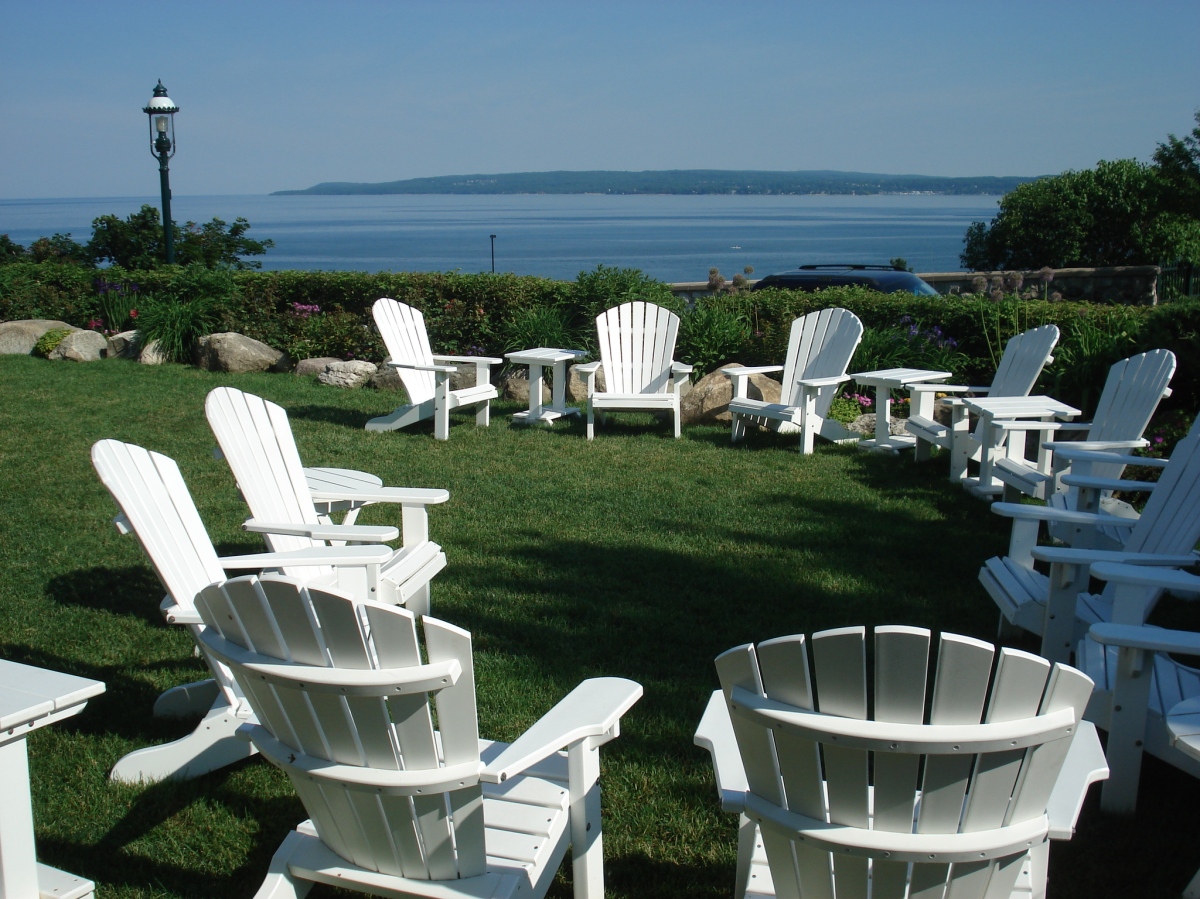 Prominent on our list of spots to visit in Petoskey was City Park Grill. According to a sign at the entrance, this business was once known as The Annex. Here young Hemingway would shoot pool and sometimes watch bare knuckle fights taking place in the park across the street.

We ate a late lunch in the Grill, in a back dining area. When we finished we questioned our waiter about the building and about Hemingway.

The waiter told us that the room we were in was a later addition. In 1919 there was just the front bar area. Ernest Hemingway had indeed been a regular.

“The second seat from the door is where he sits. Er, used to sit.”

Hemingway used to write while in that seat. The waiter told us there was still a hole in the bar there, where Hemingway would put out his cigars while writing early drafts of stories.

Well, we had to see that seat, and possibly sit in it. After we paid our lunch tab we moved to the bar area.

I sat in the second seat from the door. Hemingway’s seat. (You’re thinking, “Big deal!”) But Hemingway is the closest thing we literary people have to a rock star. Would you believe that as we sat at that part of the bar, talking about writers and writing, we felt the immortal Hemingway’s presence? Just a trifle. Likely it was only the fresh air and blue water everywhere around us, and the perfect sunshine day, and the beer I was tasting. Along with the many other sights and sounds we’d been experiencing, like the stately Victorian homes of Petoskey– and other things too numerous to describe in a blog entry.

It was the feeling of being part of an ongoing and never-ending community of writers, dating back to Homer’s time.  The feeling of art, of achieving art– and through that achievement, finding meaning in life. Ernest Hemingway was famously pessimistic about the world, the bleak games of the world, but in his art he found purpose. He achieved meaning.

Such was how we felt sitting at the bar in City Park Grill, Hemingway’s old hangout. But we looked at the polished wood bar, thoroughly, felt it with our hands, in so doing touching a part of the legacy, and couldn’t find anywhere on it the Hemingway cigar hole our waiter had described. 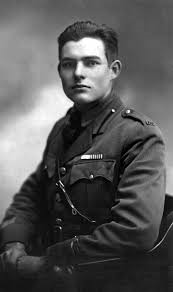 (Be sure to answer our Big Lit Question  about Ernest Hemingway!)

5 thoughts on “Searching for Hemingway”