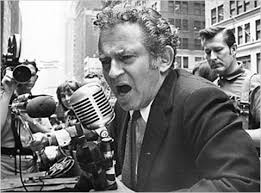 (Background: A protest group calling themselves “Outraged Writers Against” has been protesting the Tournament because of the possible involvement of renowned author Norman Mailer. The group accuses Mailer of being a misogynist, and has said this disqualifies him from public notice. This past weekend, Mel Diper sat down with the controversial figure to ask him about the matter.)
*********

MEL DIPER:  “Did you once stab your wife.”

NORMAN MAILER:  (Leaning forward in his chair while gesturing with his hands.) “The matter has already been adjudicated. Ancient history– like the ancient Egyptians who I wrote about you know in a novel which was not very well received despite its ambitious heft– nothing to do with my wife, ha! you know. But surely you’re aware I was advised by my attorney not to discuss the matter. My wife, not the novel. Fire away with all other questions, and I’ll try to dodge them like Joe Frazier dodging jabs from Ali. Ali! Ali! Ali! I understand you’re a former sports personage so you know the allusion– writers good writers anyway are full of allusions.”

MEL:  “Uh, yeah. I guess they are.” (Reviews notes.) “But how do you respond to the protesters who don’t want you involved with the All-Time American Writers Tournament?”

NORM:  “It’s all very surprising you know yet at the same time not at all surprising to I, Mailer, when you have understandably these types of ‘womyn’-led kind of interest groups or causes, fragmentations of actual philosophies which are representations of the female need to control what I call the male ego, masculine gritty-in-the-bowels or at least the balls instinct you know our need for self-expression in this shitty kind-of existentialist universe of bowel-led ‘protesters’ without a cause in our causeless phenomenological universe and–”

(Mel Diper can be emailed at meldiperjr@gmail.com. His twitter handle is @meldiper.)

(NOTE: This is a side issue to the Tournament itself– one we debated discussing at the site. We ultimately decided to run this, in the interest of putting as many happenings as possible connected to the Tournament on the record. Take it for what it’s worth.)
****

New Pop Lit has received a bad-quality video on dvd. It shows a petite young woman in a mask, dressed in black, reading a statement. Behind her with arms folded stands a tall male, similarly dressed and masked. They are supposed representatives of the activist group upset with our Writers Tournament. The poor quality of the sound and image prevents it from being shown here.

One hour after receiving the video, an envelope was dropped off at our headquarters. The envelope contained a statement whose words correspond, more or less, to those of the young woman shouting on the video. Here’s the text of the statement:

“We piss on your Tournament and your privileging of white male writers Ernest Hemingway and Walter Whitman, and the archaic notion that you can privilege anybody by combating writers against one another as if they were gladiators to feed the Hyper-Capitalist Spectacle that is America now. We say, ‘NO MORE CRUELTY!’ We shit on your privileging of American anything (There Is No Amerikkka!) which reeks of borders, fascism, intolerance and patriarchy. We will NOT participate in this clown show! We will be engaging in a sit-in and hunger strike at the auditorium, hall, saloon, cafe or other where the ‘Tournament’ is to be held– as soon as someone figures out where the ‘Tournament’ is to be held. The sit-in and hunger strike will continue until our demands are met. We will at a future time submit those demands to the capitalist pig asshole media, if this ‘event’ occasions any media. Preemptive shutting down of potential hate events before they occur is our only defense. WE WILL NOT TOLERATE THIS! Thank you.”

The printed statement was signed, “OPA! Outraged Protesters Against.”

To date the first two tournament selectees, Mr. Hemingway and Mr. Whitman, have no comment regarding this matter. They have yet to arrive in town.

(All nominations for Tournament candidates can be sent to newpoplitATgmail.com)