(Photo of a young Robert Frost.)

Have the Tournament judges had it with novelists? This seems to be the case with the latest selections, the #5 seeds, all poets.

Once THE biggest name in the poetry game– “The Wasteland” remains, perhaps, the most famous of all American poems.

Talk about famous poems by famous poets. The title “The Road Not Taken” has become part of the national conversation. For decades Robert Frost was the widely-known face of poetry in America.

For a couple decades until her death in 2014 Maya Angelou was the face of American poetry– aided by her performances at Presidential inaugurals. Who’ll rise to the forefront to replace her?

This beat poet’s entry into the “Most Famous American Poem” sweepstakes is “Howl.” An audacious bid for greatness. Allen Ginsberg never came close to writing another poem with similar impact. 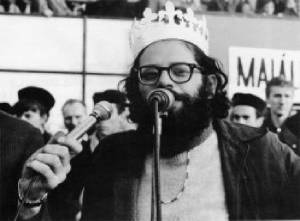