These four literary giants are very different from one another in style, voice, background, and ideology. What they have in common is the expression of American striving.

A.)  F. Scott Fitzgerald. The writer as myth. The most glamorous of all literary stars, Scott Fitzgerald wrote about the American Dream and lived it. With Fitzgerald the case to be made is why he isn’t a #1 seed. For two reasons. First, he didn’t influence and express the American voice to the same extent as our first four tourney candidates. Nobody talks like Fitzgerald or writes like him. Being the best means being unique– and he’s the best American writer, the best stylist, if not the most important. Second, Fitzgerald has never been as big on a world scale as the others. Other cultures never quite “got” him– a sign of how truly American Fitzgerald is. Still, he’s never been more appreciated– the artistic failure of the most recent “Gatsby” movie notwithstanding. Fitzgerald’s works– all his works– contain special magic, part of his uniquely American vision, which can’t be adequately translated to more superficial vehicles like movies and television.
**** 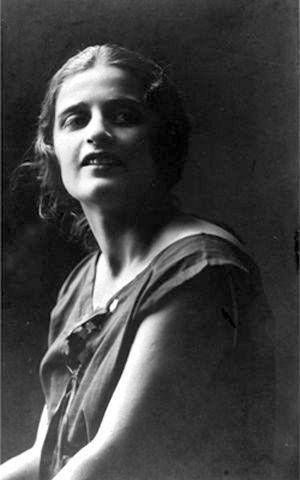 B.) Ayn Rand. The literary world for seventy years has refused to acknowledge this person, but it’s like trying to ignore the sun or the moon. Her influence on America is bigger than what has become quite a tiny literary world. Rand’s ideas and analysis are the world we live in now. America, with its oversized strengths and flaws, its egoism and materialism, is a Randian world. If we as advocates of literature ask literature to be a living part of the civilization, a necessary part of the argument, then Ayn Rand, more than any American writer, past or present, fulfills that role. The Reagan era took its ideas from her. The Tea Party of more recent years was part Jefferson, part Jesus, and part Ayn Rand. Atlas Shrugged alone sells half-a-million copies a year. Added note for the p.c. crowd: Ayn Rand was a feminist before there was feminism.

But, the writing? What about the writing? Despite the ostensible logic she claimed to express, Ayn Rand’s novels– even their ideas– are illusion. Her books are very much creative works of art. Passionate works, which is why they appeal to so many individuals. Flawed Atlas Shrugged is one of the most artistically ambitious American novels ever written. Her earlier masterwork The Fountainhead is one of the most accomplished– also one of the most overlooked, because the extreme ideology in the later novel infuriates so many establishment intellectuals, never more than in the present time. (New York Times Book Review editor Pamela Paul put Rand’s novels at the top of her “Hate Reading” list.)

I’ll address Ayn Rand and her work further in a separate post.
**** 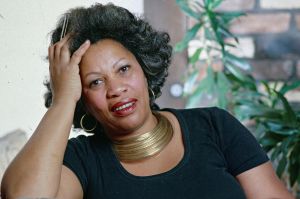 Morrison allows us to bring American literature to its varied present while at the same time strengthening its tie to the past. Morrison has a unique voice– a big, loud, American voice– which at the same time is inextricably linked to founding American authors like Herman Melville and Harriet Beecher Stowe. If Ayn Rand’s viewpoint is part of the contemporary American argument, then so is Morrison’s. Her emergence as an author marked recognition of what had always been present; the contribution to American letters– to the creation of a unique American literature– of the African-American voice.

Our literature is NOT simply a transplant of European sensibilities onto this continent, but a fusion of many influences, many voices. From the nation’s beginnings, the black voice, which includes African folk tales, black music, black humor, has been an underground current seeping into other currents. A voice which was absorbed and changed itself by other voices. Those writers influenced by the black experience of America range from Joel Chandler to Carson McCullers to William Faulkner to the Beats. To even our verbose tourney friend Norman Mailer.

Here in this country, in this event, there’s no “white” literature or “black” literature, or this division or that one. There’s only American literature. One of the goals of the Tournament is to show that.

Besides, Toni Morrison isn’t just a renowned novelist. She’s also a dominating essayist, and has written the libretto for an opera– “Margaret Garner”– which is quite good.
**** 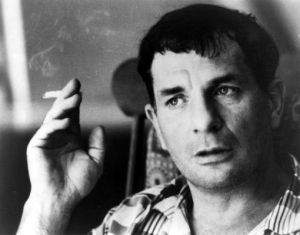 D.) Jack Kerouac. As dynamic a persona, as mythic a person, and as American a voice as anyone. On the Road, his most influential book, is quintessentially American. As much as any work of literature, it captures and defines this country, which has always, always, been about the open road– the impulse toward freedom, the need to travel ever farther. Where, we’re not always sure. Fitzgerald called it a green light. Kerouac expressed the driving and striving on a more visceral level.
****

We at New Pop Lit believe in the American experiment– in Gatsby’s “green light.” 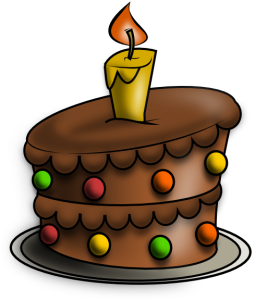 “A Miniature American Dream” by Wred Fright
No thank you for the tapas.

No thank you for the cupcake.

No thank you for the slider.

No thank you for the pedigreed lapdog.

No thank you for the 100-calorie package of snacks.

No thank you for the 59-ounce carton of orange juice.

No thank you for the offer to pay only 77 cents on the dollar for Social Security.

No thank you for the cybersex.

No thank you for eavesdropping to keep me safe.

No thank you for stores open on Thanksgiving.

No thank you for the diet beer.

No thank you for the leased car.

No thank you for Daylight Savings Time.

I’d like you not to mess with the clock.

No thank you for “liberal” presidents.

I’d like Richard Nixon to come back from the dead to see that he’s left of the Democrats now.

No thank you for the miniature American dream.

Mine is still fullsized.

*******
Send us your fun/striking/provocative/shocking poem to funpoppoetry@gmail.com.
***
Be sure to read our Report on the Pop Poetry movement!
Loading Comments...